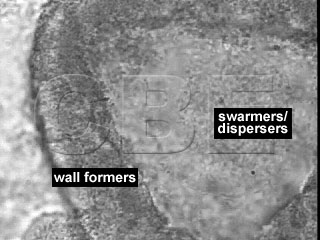 The darker perimeter area of the biofilm cluster above contains stationary cells of the species Pseudomonas aeruginosa. Other members of the same species in the internal, lighter area are meanwhile engaged in a highly motile "swarming" activity that will lead to a dispersal event. Courtesy, B. Purevdorj & P. Stoodley

Recently biofilm researchers have become intrigued by evidence of different, but seemingly coordinated, behaviors of individual cells in single species biofilms, such as the "swarming" and "wall forming" behaviors captured in the image at right.

In the late 1990s an investigation of the marine bacterium Pseudoalteromonas at the single-cell level revealed two physiologically distinct subpopulations of the organism on a chitin surface: one that was chitinase active and remained associated with the surface, and another that was non-chitinase active and released daughter cells into the bulk aqueous phase.

At this point, researchers have more questions than answers about their observations, but they hypothesize that biofilm populations are capable of some degree of "division of behavior" that promotes the survival of the whole.

Back to beginning: Waiting to grow