Marine Vibrio spp. (a) grown in nutrient medium, (b) starved for one week, and (c) starved for one month. Starvation reduces the size of these organisms to produce ultramicrobacteria (UMB) that are approximately 0.3 microns in diameter.  These spore-like cells can be resuscitated to normal size and activity when nutrient is re-introduced. Courtesy, Novitsky and Morita

The discovery of large populations of natural ultramicrobacteria (UMB) in rocks more than 3,000 feet underground clearly indicates that these small, dormant cells are transported effectively through porous media (soils, sand and rocks) in groundwater.

Researchers at the CBE and elsewhere are using this information to design and test methods to bioremediate contaminated subsurface soils. Microbial species capable of degrading contaminants are injected at the site of contamination in their starved UMB state and carried into an affected area by groundwater flow; they can then be resuscitated to begin breaking down contaminants in place. The targets of CBE bioremediation projects include petroleum hydrocarbons, reducible metals and TNT.

This concept is illustrated below. 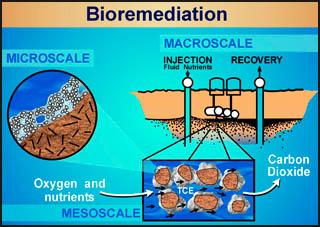 Resuscitation of starved ultramicrobacteria to an active, slime-producing state is also the basis for efforts to create biological "slime curtains" underground to prevent groundwater from spreading contamination in soils.

There have been promising results from combining a TCE-degrading organism with a thick biofilm-forming organism to form a biobarrier that provides containment of the contaminant while it promotes bioremediation. See the schematic diagram below. 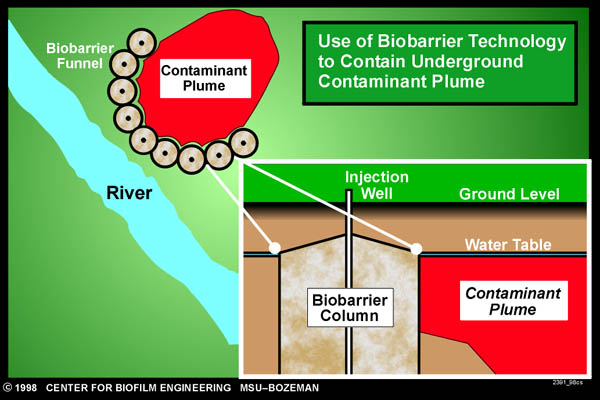